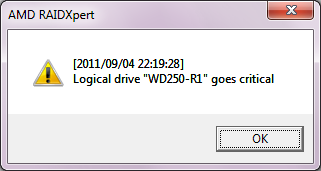 This error would be directly related to disk failure! I decided not to replace the 250GB HDD but instead remove the RAID array and keep as a single logical drive (no RAID). This would prevent the error from displaying eachtime Windows loads. The problem I had was with the wording “Press Ctrl+Y to delete the data on the disk!” prompt when deleting the RAID. Not sure if this meant all HDD Data or just the RAID Data. Rather than taking any chances with precious data, I backed it up before proceeding with the changes…

To Confirm: The removal / dismount of the RAID Array can be done so without any loss of data or disruption to the system workings. I am simply reporting my experience!

Note: This is using the same RAID chipset as the HP Microserver, but actually on a Gigabyte GA-890GPA-UD3H (Socket M2) Motherboard 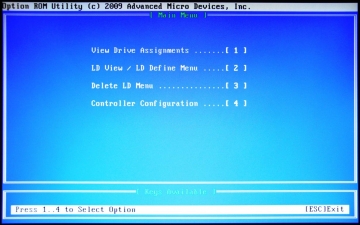 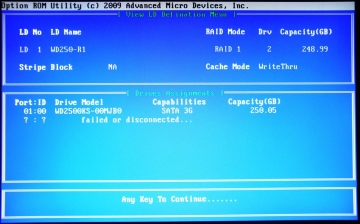 “Delete LD Menu” – In my scenario there was a strange issue as the second 250GB drive was visible, however not recognised as part of the RAID1 mirror. 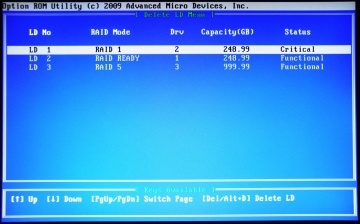 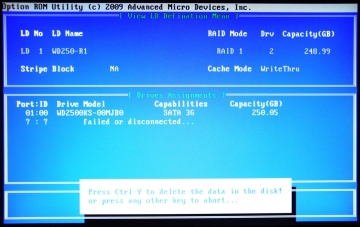 Rebooted System – RAID1 has now been broken and 2 x 250GB are showing as independent drives in POST Info.

Windows reports data is still available on the disk and no information has been lost (Drive N:\ 250GB)

There is a good guide to creating arrays and installing on the HP Microserver: here